A rough week in Maputo

Real gunshots don’t sound like they do in the movies, those dull, low beats accompanied by scary music.

A real gunshot is a high-pitched, staccato snap. I was eating dinner with a few expats at a restaurant at a garden in one of the wealthier suburbs of Maputo when I heard this snap for the first time. I looked up and saw two men in a fight ten yards away from me. One was holding an AK-47, the other had his hands up in protest. The man with the AK-47 fired his rifle a second time, and I saw his body sway backwards with the force of the shot. He was shooting one of the restaurant's two security guards. The other had already been shot.

As my friends ducked to the floor, I sat there paralyzed. I felt like I was watching the scene from a safe, far away place.

And then the man turned to us and started shooting.

Finally, feeling the weight of one of my friend’s hands pulling me down, I crouched on the floor. The bullets flew past our table and my mind was completely blank. Some of my friends started to crawl across the park.

Ignoring all the training I had received at Columbia and from my family throughout my life, I decided to crawl, then run, with them.

As I was running, I saw two girls falling to the floor. I was positive they were shot. I ran faster across the park, loosing my shoes along the way. I ran and ran and ran, hearing gun shots in the distance, sure that the men were following me.

Finally, some of my friends who had run in the same direction as me saw a security guard at a building. We filed in through the gate and I begged him to let us stay. I explained that there had been an attempted robbery, a shooting and that we were all in danger. He nodded his head but explained that we couldn’t stay there, we had to go back to the street. We complained that we did not feel safe, that we just wanted to stay there while we called a taxi, but he refused. He pulled out a massive gun and went out to investigate, dragging us with him and closing the gate.

At this point, a pick-up truck with policemen swung past us toward the restaurant, where we heard more shots.

I was shaking uncontrollably. Everyone I called didn’t answer and I realized I had absolutely nowhere to go and nobody to run to. I’ve never felt so alone. Finally, the woman who’s house I’m renting answered the phone. Frantic, I told her what happened and her husband finally came to pick me up 20 minutes later. The ambulance still hadn’t arrived when he got there. The guards lay bleeding on the floor.

We found out that the rest of our group was Ok. The girls I had seen fall twisted their ankles while they tried to run from the scene.

The next day, the full story came out on the news. Four men encircled the restaurant, carrying AK-47s and semiautomatic pistols. After we ran, they robbed the remaining clients. Using someone’s iPhone tracker, the police were able to follow the men to a neighborhood on the outskirts of Maputo. But the men outran them and hid. They’ve still not been found. The two guards are in critical condition at the hospital.

I thought I would feel better in the days following the shooting, but I only felt worse. It was as if my brain had turned on its night vision. Everywhere I looked I saw threats that had previously gone unnoticed: the gate of my house that always remained unlocked, the tjopella drivers, who knew my schedule and where I lived, the beggars on the street, asking for money at night.

My heart would pound and I could feel the adrenaline flood my body with every sharp sound I heard. I would tell myself that it was Ok, that I wasn’t in danger anymore, but my body just wouldn’t cooperate. On Saturday at lunch, the waiter dropped his plate and I couldn’t stop shaking, half an hour later.

The film of what happened played in a loop in my head. Every time a thought would drift from my mind, the film would start playing,

Sunday morning, some of the people who had been at the restaurant on Thursday and I decided to cross the border to South Africa and spend the day at Kruger park, a 7,500 sq. mile game reserve.  For twelve hours, we zigzagged through the park, searching the dry bush for leopards, elephants and giraffes. For the first time in days, I felt safe. I found myself able to think about something other than that man shooting his rifle.

Looking out into that endless park, I saw no sign of human existence, save for the occasional car that would pass us by. The beautiful red sun set as we left the park and I remembered why I came here.

My very wise friend Liz reminded me that I came to Maputo to see something different. And that is exactly what has happened. I am seeing good and bad, and the only thing I can be sure of, is that I’ll leave here having seen more of the world.

I’m taking it one week at a time, but, thanks to my supportive family and friends, I’m finally feeling like myself again.
Posted by Marina at 7:09 AM 4 comments:

"Trying to live the image of the life which you have in your head ... it’s really hard not to do that, but I do think maybe it’s cheating.... Cheating life. Cheating yourself out of a real engagement with life, which involves surprise, not just you moving through your environment with this pre-determined idea of what you intend to do with it and how it should react to you. It’s like thinking you’ve been put on this earth to master life and make it submit."


- Sheila Heti for the Paris Review
Posted by Marina at 8:52 AM 1 comment:

Betraying my Paulista roots, these words would blurt out of my mouth, triggered like a tick onto anyone who expressed an interest in visiting Brazil. I would ramble on and on about the unsurpassed charm and natural beauty of the city I had been pining for since my first visit five years ago.

So when I got a chance to chase a story to the Rio +20 summit, I didn't hesitate. While I spent most of my day interviewing a Mozambican activist, I squeezed in just enough time get some sand in my hair.

Rio did not disappoint. But with those colossal mountains kissing the ocean day after day, how could it? 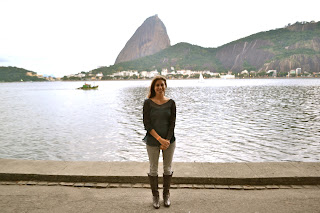 Next stop: Johannesburg for some training and a safari :)

"...the act of telling a story always involves a gap. Sometimes confusion is the risk of ambiguity–I say that to students all the time. It’s true at the fireside and it’s true in the parlor, and it’s true in made-up towns and New York. Two humans face one another, words come out of one, words go into the other mind through the ears and eyes of the listener. It’s a story. It’s simple. The gap is the thing. Make sure you build the bridge."

- Patrick Sommerville
Posted by Marina at 6:00 AM No comments: